Ocean Nexus Center principal investigators Drs. Ota, Allison and Fabinyi have recently published commentary in Aquatic Conservation: Marine and Freshwater Ecosystems. “Evolving the narrative for protecting a rapidly changing ocean, post‐COVID‐19,” outlines three risks associated with the well-intentioned idea of “one world” or “one ocean.” The article is reprinted below in its entirety. 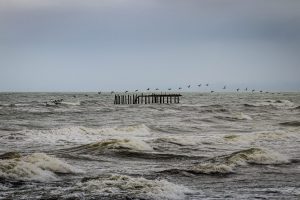 Evolving the narrative for protecting a rapidly changing ocean, post‐COVID‐19

Calls for global action on environmental issues have been popular since the 1970s and public interest in them has been raised by rallying people to the notion that we all share one world. One need look no further than the COVID‐19 pandemic to realize that sharing a world does not mean an equally felt impact or equally shared burden among all people when that world is threatened. Despite the initial good intentions of this ‘one world’ voice, when applied to the oceans the term ‘one’ risks reflecting only the more privileged sectors of society and their worldviews, rather than the diverse circumstances and values underpinning the complexity of human–ocean relationships. While we support the authors’ sentiments of unity, their recognition of the oceans’ roles in our interconnectedness, and the lack of a planet (or ocean) ‘B’, we also want to stress that humanity is not all in the same boat, people do not have the same destination in mind and we set out into the ocean future from very different home ports. Even within a region or nation, different people in society are poised to benefit differently from the future ocean economy and environment, depending on how ocean governance is developed, and on the conservation actions that support its sustainability. Thus, while the paper by Laffoley et al. makes the important point that the biophysical properties of the ocean play a significant role in every society and every Earth system, we must question ‘the first, simple step of dropping the “s”, recognizing the ocean as a single entity, and referring to the ocean in the singular’ (Laffoley et al., 2020, p. 13) with regard to three risks associated with that seemingly ‘modest proposal’.

The first risk is that calls for ‘one ocean’ can undermine the notion of and action for ocean or blue justice. Although air, water, soil and oceans are all interconnected global biophysical systems, their degradation is often felt most acutely at local levels, and by poor and historically marginalized peoples. Thus, while the ‘one ocean’ narrative plays well in global, high‐level discussions, it underplays the historical experiences of fighting environmental injustice. The environmental justice movement is rooted in local people’s resistance to the actions of governments and corporations who located their most polluting industries and processes in proximity to the poorest people, thereby reducing their health and quality of life much more than that of wealthier people located further away (Bullard, 1990). Managing diverse local impacts in equitable ways requires different actions along different pathways. Each of these calls for different actors, knowledge, policies, objectives, financing, institutions and organizations. The diversity and local specificity of the required responses are not well served by global homogenization.

The second risk is that appealing to the biophysical fluidity implicit in ‘one ocean’ panders to a view that ocean economic benefits will also mix, flow – or trickle down – to all. The reality is that the ocean ‘estate’ is unequally resource‐endowed and inequitably claimed and allocated, and there are structural barriers to economic fluidity. Taking fisheries as an example, those making economic profit from the ocean – industrial fisheries and retailers – and those taken advantage of by those sectors – fish workers and artisanal fisheries – do not share the same ocean from an economic perspective. Inequities and barriers to ocean economic fluidity extend to all sectors of the ocean economy – who gets to live by the ocean, derive cultural identity from it or get nutrient rich food from it (Cisneros‐Montemayor et al., 2016). All of these inequities are hidden by the idea of ‘one ocean’.

Third, ‘one ocean’ thinking risks undermining certain kinds of knowledge about the ocean: knowledge that is local and/or Indigenous, practical or ‘phronetic’ (Allison et al., 2020). In designing policies to be implemented, context and diverse values need to be considered throughout decision‐making processes and assessments of effectiveness. The holistic nature of the ‘One Health’ framing espoused by Laffoley et al. (2020) provides a more diverse and inclusive knowledge base beyond the ocean governance model of science‐based regulations of economic development. In this current world that is increasingly demanding diversity, equity and inclusion, we must focus on governance models built on solidarity borne from the recognition of this diversity, not through another top‐down call for unity.

Finding and building the way for such solidarity is critical in times of disasters. When the 2011 Tohoku Earthquake and Tsunami struck Japan’s northern coasts, English fisher friends approached Ota, eager to send money in support for the affected communities. They reasoned that they all shared the oceans. They cared for the heritage and the ways of life in Japan’s coastal communities – heritage and ways of life that are not of their own – and wanted to contribute to their survival. We recognize that Laffoley and colleagues share this same spirit in proposing ‘one ocean’ and that they prioritize the heritages and lives of coastal peoples no less than biodiversity. Yet the ‘one ocean’ narrative risks concealing the localized costs of and responses to environmental degradation, downplaying the ways in which benefits from the ocean are inequitably distributed and minimizing diverse knowledge contributions.